Everyone is locked up in their houses now or something, and what choice do we have? So we’ll talk about social distancing and creativity – Creative Social Distancing? – we’ll give a call to Ethan from Cameradactyle, talk about wire photos and what they have to do with a James Stewart movie, and zine reviews.

After a sort of meandering wellness check (including a talk about an exhibition Vania’s in), we hit the answering machine!

I Hate Your Answering Machine
We asked listeners to call in and tell us how social distancing has effected their creativity.

The array of answers was encouraging. Despite being closed in and often separated from friends and photolabs, our listeners have got their collective shit together.

Some are building darkrooms, one is building a camera out of his bedroom (like the entire room), another is perfecting old and forgotten color chemistry, some are still working in the healthcare field and use photography to keep them going.

Shoot Inside Challenge Thing
That said, we’re offering a way for you to stay creative if you want to – and to do it indoors.

For those who like challenges and being tasked with things, we’ve got the Shoot Inside Challenge Thing for you! Each episode as this whole virus thing blows over, we’ll give you a challenge. This isn’t a contest. There’s no winners. But we will judge you silently.

See what you can come up with. Then after you dev the shots, tag us and we’ll feature them. #allthroughalensathome

For this episode, let’s try…
-Natural light – pick five random things from your house and take a still life with them interacting in natural light. Points for absurdity.

Interview
On this episode, we checked in with Ethan from Cameradactyl. We talk about 3D printing medical parts, new cameras, new camera ideas and the movie Call Northside 777.

There’s a lot going on in his shop these days, and we talk about a good fair amount of it.

Inspired by the Jimmy Stewart movie Call Northside 777 (1948), we dig into the history of the wirephoto – actual photographs sent over telephone wires long before the internet.

We explore the early attempts at this, starting with etchings encoded and sent via telegraphs. But soon we’re mentioning names like Arthur Korn and Édouard Belin. And when Western Union, AT&T and the Associate Press get into the game, all bets are off! 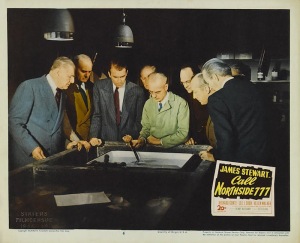 Here’s a quick rundown on how all of this worked:
After the print was ready, it would be attached to a cylinder on the transmitter. This cylinder would spin 100rpm under a more modern photocell. A small lamp would shine a very small light onto the print, which would be reflected back onto the photocell. The cell, as before, would turn the array of gray tones into signals that could be transmitted across telephone wires to a receiver.

This receiver held a piece of photopaper on its cylinder. As it spun at 100rpm, the signals coming across the wire would be translated back into light. The varying lights and darks were exposed to photopaper making a positive print. Reproducing the entire photo took around 10 to 17 minutes.

By the end of the decade, these transmitters were made small and basically portable, fitting in a large suitcase. All that had to be done was to tap into an existing phone line and send the photo to a receiver near a darkroom. 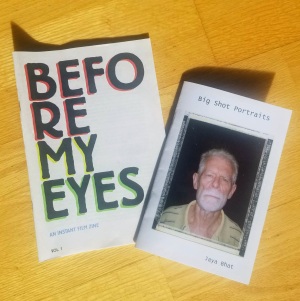 Before going into the zine reviews, we talk about our quick adventure to Polacon San Francisco!

But then we get into the zine reviews, hitting two zines that we picked up that weekend. We review Big Shot Portraits by Jaya Bhat and Before My Eyes compilation zine, which you can get here (probably).

Kenny Rogers
We lost Kenny Rogers recently, who also happened to be a large format photographer. Here’s the original article about his photography that everyone keeps referencing and not linking back to.

Rogers started as a kid with a Kodak Brownie Hawkeye and eventually traded up to a Hasselblad. He got really serious about it when he picked up a Linhof Master Technika 4×5. He published a book of landscapes and then moved onto 8×10, he shot portraits with that mostly, publishing two additional books from those.